Some studios pack the power of Zeus into their games while others seek to harness the clout of Hades. Few are as audacious as to bring both deities together in one game to let them duke it out as Red Tiger has in War of Gods. Well, apart from games like 2 Gods Zeus vs Thor or Artemis vs Medusa which attempted to do that exact thing. Bolstering the fantastic classic imagery, players get three bonus games, where symbols may be upgraded, and reels or rows expanded. 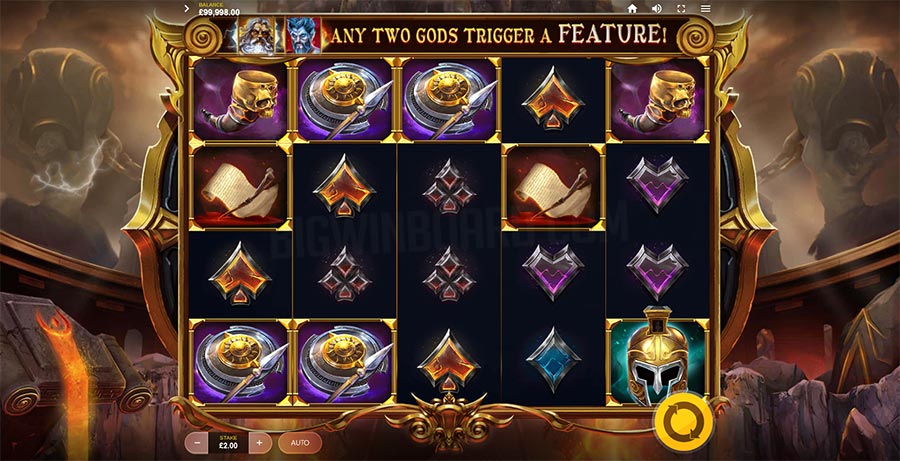 Let’s start with a little story from the world of Ancient Greece. According to legend, after overthrowing the titans, Hades, Zeus and Poseidon (who were brothers) each drew lots to decide which part of the world they would rule. Poseidon got the sea, Zeus the heavens, and unfortunately for Hades, he got the short straw, meaning the underworld. Perhaps this was what put him in a warring mood? We can only speculate motives since they are not explicit in Red Tiger’s game. Maybe it’s just a brother thing. Then again, Hades did abduct Zeus’ daughter Persephone to be his consort, so maybe it’s that? Whatever the case, Zeus battling Hades is a mighty theme, providing a bunch of great concepts to make use of.

To Red Tiger’s credit, they’ve done a remarkable job of bringing the sibling rivalry to the small screen. War of Gods is played out on a 5-reel grid (expandable during certain features), deep in the bowels of the fiery underworld amidst fallen columns, Sisyphus with a boulder on his back, and plenty of lighting raining down from the heavens, heralding Zeus’ approach. The soundtrack is suitably epic; the result making an excellent first impression.

It’s a shame the rest of the game doesn’t hit the same heights. A tingle of disappointment occurs when perusing the help file in which we find a somewhat lower than average default RTP of 95.66%. No less disappointing is the calculated max potential, though we’ll leave the reveal for the verdict. Offering bets from 10 p/c to £/€20 per spin, expect volatility to be high along  with a hit frequency hovering somewhere around the 20-30% mark.

At the default grid size of 5×4, players get 30 paylines to land winning combinations of three or more of a kind on. There is a stack of symbols at hand too; around half are special symbols used during features, the rest are eight regular pays. In this latter category we find clubs, diamonds, hearts, and spades as the lows, followed by parchment, horn cups, shields, and helms as the highs. On the default size, five of a kind wins are as good as it gets, producing high pay wins worth 4 to 10 times the stake. With so many symbols on the paytable, it might be a bit of a surprise to learn there is no wild in War of Gods.

As well as being a wild-free zone, there are no free spins, but three bonus games to play for. With names like Wrath of Zeus, Hades Hellfire, and Warring Gods, don’t expect a whole lot of light-hearted laughs to go with the higher winning opportunities they offer.

Hitting two 1×2 sized Zeus symbols on the first and last reels triggers the Wrath of Zeus feature. In this game, only high-paying Zeus symbols appear. Whenever these 1×1 symbols land, they turn sticky for the duration, possibly transforming into 1×4 Super Symbols. In this feature, a special upgrade symbol may also land increasing the value of Zeus symbols up to three times – landing a line of five of the highest paying Zeus symbols is worth 20x the bet. Wrath of Zeus continues as long as new symbols keep appearing on the reels.

When two Hades symbols land, they trigger the Hades Hellfire feature where only high paying Hades symbols appear. As before, Hades symbols are held in place when they hit and may transform into 1×4 sized paying tiles. In this one, a special expand symbol may land to expand the grid up to 7×6 in size, thus increasing the total number of paylines to 60. Each new row expands Hades Super symbols up to 1×6 in size worth 50x the bet for seven of a kind. Hades Hellfire also ends when no new symbols land on the reels.

The third bonus game is Warring Gods, triggered when Zeus and Hades land in the base game. This feature uses Zeus/Hades special symbols which, again, lock and possibly expand when they land. The rules are basically the same as before, though one difference is upgrade and expand symbols are both available. A full line of seven Hades/Zeus symbols is worth 100x the bet.

War of Gods is a game that gets off to a great start but doesn’t capitalise on the impact. Red Tiger regularly designs great looking games, and Wrath of Gods is another strong example. It’s a game that comes across as all business, making full use of the theme to create a deep atmosphere worthy of the two titans it portrays. There’s an almost biblical quality to the visuals, while the symphonic soundtrack adds extra drama.

The gameplay is pretty good too, though like many Red Tiger slots, triggering the good parts can take time. Hold and win features are common, yet rarely do you get three of them in one game, nor so many variations within them. In some ways, it brings to mind Red Tiger’s Clash of the Beasts the way you can have one or the other god, or both at the same time. Like Clash of the Beasts, when the siblings fight it out is where hitting the game’s max potential has its best chance of occurring. By best we are talking about a figure of 2,518 times the bet which is seriously underwhelming on a game like this. Perhaps the prize money was converted from drachmas or something?

To sum up, War of Gods is brilliantly presented, and the features are great, offering a lot more complexity than your usual hold and win feature. It’s a real shame War of Gods is ultimately let down by underperforming stats, and mediocre potential returns.

Artemis vs Medusa: Overview Get set for some Ancient Greek girl power as the forces of light and darkness line up to do battle in…

Temple of Medusa: Slot Overview Of the three gorgons in Greek mythology, the one you are most likely to run into in the iGaming world…

Valhalla Saga Thunder of Thor: Slot Overview If you play online slots for any length of time, there’s a good chance you are going to…