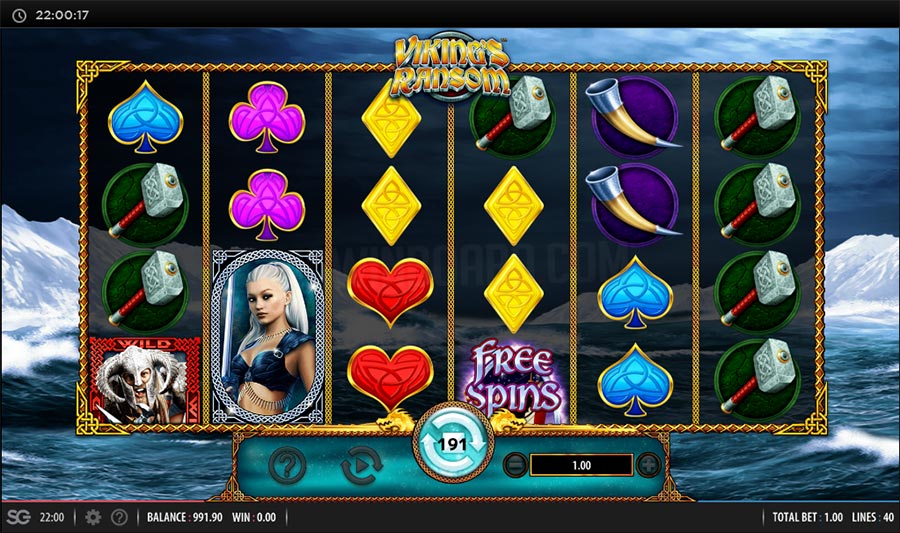 Ah, the Vikings. That bunch of rascally raiders, we can’t seem to get enough of – despite their brutal way of life, or perhaps because of it? They are the stars of countless slots. Now it’s Barcrest’s turn to bring everyone’s favourite horn helmed warriors to the reels and spin for rewards. Or, ransom as the case may be. Barcrest slots often find themselves famous for all the wrong reason, let’s see how Viking’s Ransom fares.

Viking’s Ransom is played over 6 reels, 4 rows, and 40 fixed paylines. In the background, players are treated to a Viking Longship bouncing along icy waves deep in winter – a season when they famously stayed home to rest up for the summer raids. There is a huge range of bets on offer from 10 p/c up to £/€500 per spin. Low rollers, beware – RTP for £/€2 bets and above is fine on 96%, but stakes below that amount cause the RTP to drop to 94%. Is that an incentive to bet higher or not bet at all? Along with that disappointing statistic is a very un-Viking low/medium volatility. A berserker this game is not.

Often, mobile users want to play a slot in landscape mode rather than portrait mode. That way more of the background fits onto the screen, and the more atmosphere can be soaked up. The Viking’s Ransom slot is one of the few where the opposite is true. This time you want to play in landscape mode to escape a background so badly animated it induces a form of seasickness after a while. The poor graphics spill over into the symbols and animations which have a 2005 vibe to them. It’s hard to tell if they are retro or just shoddy?

To be fair, the male and female Vikings are decently done. The warrior with the fiery background is the most valuable symbol at 5 times the stake for six of a kind. He is followed by a not unpleasant Skade-looking warrioress. These two are called character symbols which crop up again during the features. Next up are classic Norse icons such as crossed axes, a horned helm, a hammer, and a drinking horn. The low pays are 4 bright card suits – spades, clubs, hearts, and diamonds. There are a bunch of wilds to help create winning combinations. We get common 1×2 and 2×4 sized wilds, as well as Berserker wilds in 1×1 and 2×2 size. In all cases, they substitute for any symbol except the scatter.

The features are a mix of modifiers that either appear at any time or need to be triggered. Up first is the Reel Link Bonus. At random times during the base or bonus games, lightning bolts can strike the reels which link two of them together. This could be reels 1 and 2, 3 and 4, or 5 and 6. These linked reels only have colossal 2×4 character symbols or 2×2 regular symbols on them. Lightning can strike the same reels twice, when it does, only colossal 2×4 wilds appear on it.

Things come to a head in the Berserker Free Spins round. The Viking ship symbol is the scatter which can appear anywhere and when 3, 4, 5, or 6 scatters are in view, they award 8, 12, 15, or 20 free spins respectively. They can also be retriggered in the same way during the feature. What makes the bonus round special is that Berserker Wilds enter the game. At the end of a Berserker Free Spin, if there are any wilds in view, the Berserker Wild Bonus may come into play. If it does, a number of Berserker Wild symbols are added to the reels in random positions. Moreover, if the Colossal Symbols are in play, they can be changed to a colossal Berserker Wild.

So where to begin? From old fashioned clunky graphics to stats, to potential, Viking’s Ransom is a hard game to warm to. As mentioned in the intro, there are loads of Viking themed slots, so why choose this one? That’s not just a rhetorical question, but a genuine search for an answer. It’s not for the potential, that’s for sure. Landing a screen fully stacked with the premium symbol return a so-so hoard of 200 times the stake. Viking crews would mutiny over a haul like that.

Credit where it’s due. The character symbols and wilds have been well drawn. Free spins can be retriggered, which is always nice, and the colossal symbols have their entertaining moments. Ultimately, however, there is no way the pros can outweigh the considerable cons. Viking’s Ransom is undoubtedly one of the worst slots we’ve played in a long time. If, for some reason, you do decide to take on this train-wreck of a slot, make sure to stake less than £/€2 per spin to get that slap in the face RTP rating. In that way, you might get a notion of how villagers or clergy in the middle ages felt being ravaged by a Viking raid.

Asgard Warriors: Slot Overview Like other relatively young providers finding their voice, 1×2 Gaming has tended to play it pretty safe when selecting themes to…