Like Jekyll and Hyde, when it comes to designing Megaways slots, iSoftBet has something of a dual nature, likely due to there being different teams handling the various projects. On one hand, they have proven proficient at crafting gorgeous looking games powered by the popular engine, offering visuals of high quality coupled with features or mechanics not seen elsewhere. On the other hand, we get slots like The Ruby Megaways, a Megaways remake of their 2018 release The Ruby. As a standalone, it could be alright for enthusiasts after some retro action on a larger slot setup. However, it’s basically a copy of Shining King Megaways, which was, in turn, a clone of Majestic Megaways, iSoftBet’s second use of the engine. The result is a game that is difficult to appreciate, despite offering solid numbers and gameplay. 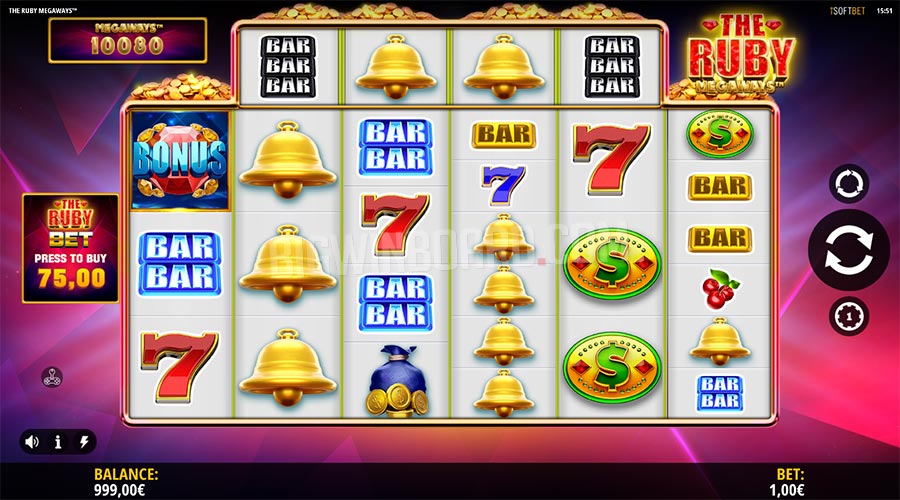 If you’d never played an iSoftBet Megaways game before, and not witnessed the magic their effects team can conjure up, you’d be forgiven for thinking this was a studio struggling to find an identity. Graphically plain, though the shimmering background is pretty, there is little imagery that hasn’t been used countless times before. Even the soundtrack, a lacklustre jammy organ piece, possesses a vibe so mellow it’s practically lying down. All in all, a decent enough view for fans of retro gaming, yet there’s nothing about The Ruby Megaways’ audio-visuals which stands out.

We mentioned solid numbers, starting with an above-average RTP of 96.11% in default mode, rising to 96.86% with the feature buy activated. Potential is large though as typically is the case, while volatility clocks in at medium/high. The Ruby Megaways has no problem chipping away at a balance, then blowing up later on down the track during bonus rounds.

Playable from 20 p/c to £/€20 per spin, gaming takes place on a standard 6-reel Megaways actin area, each reel dynamically displaying up to 7 symbols. In addition, there is a horizontal bonus reel located above the main reels holding 4 additional symbols. The total number of symbols varies on every spin, meaning there can be anywhere from 324 to 117,649 ways to win in play. Hits occur when three or more matching symbols land left to right from the first reel onwards.

As to symbols, pretty much all are stock images used since the dawn of slot time. The lower value tiles are made up of bars, double bars, triple bars, cherries, blue sevens, and red sevens. Offering better returns are bells, coin bags, a dollar sign, and a big shiny ruby. Landing a line of six from this latter group is worth a payout from 2 to 50 times the stake. Worth mentioning too, the ruby pays out for two of a kind, though it is an elusive symbol to be sure. Finally, the last symbol in this section is the wild, appearing only on the top bonus reel. Wilds substitute for all symbols except the bonus.

Be forewarned, The Ruby Megaways is not a game you play to experience the outer limits of slot development. All features covered here are your standard Megaways combo, such as cascades, mystery symbols, free spins with multipliers, and a bonus buy.

Cascades suit Megaways like nothing else, and are triggered after each win. A reaction mechanic springs to life, removing the winning symbols to let new ones cascade down to fill the gaps. Consecutive wins may occur from this process, continuing until no new wins lands.

Keep an eye out for the Mystery symbols, which may land randomly bearing a question mark on them. When they appear, they all transform into the same matching symbol – anything except the wild or bonus.

What you want to see are 4 or more scatter symbols anywhere on the reels to grant you access to the free spins game – 4 scatters awards 12 spins while any additional bonus symbol adds +5 free spins up to a maximum of 27. During the round, scatters only appear on the top horizontal reel where 3 or 4 in view award an extra 5 or 10 free spins. A win multiplier is also introduced in free spins mode, starting on x1 and increasing by 1 after every cascading win with no set limit.

For those not willing to wait for the free spins round to drop by chance, there is The Ruby Bet option available. For a price of 75 times the total bet, free spins are triggered whilst also raising the RTP to 96.86%.

Playing The Ruby Megaways, you kind of get a feeling of irrelevancy, like what was the point of cloning Majestic Megaways using a fruity/classic theme when you’ve already done that not so long ago? There is nothing here we haven’t experienced in Shining King Megaways, from stats, features, to theme. We know iSoftBet can turn out some cracking good Megaways slots when they put their mind to it as we’ve seen with Moriarty Megaways, but The Ruby Megaways comes across as a project the B-Team handled to keep up with a quota, lacking a whole lot of passion.

Taken in a vacuum, there’s fine Megaways gaming going on here, and the fruity thing has been handled pretty well. If this is your genre, then technically speaking, players should be entertained. The collection of features offers a nice balance of base game and extra bits, while free spins can go as wild as any slot using a progressive multiplier. Like Majestic Megaways, it means potential as high as 35,000 times the bet is possible. So if big numbers in a Vegas-y environment played on a Megaways grid are all that matters, this is as good a choice as any.

The Ruby Megaways isn’t exactly fevered gaming (unless big wins are landing) though. The low key soundtrack, old school visuals don’t really do anything, and the lack of warmth, make it better suited to a chilled session rather than diving deep into engrossing subject matter or blowing your hair back. Despite unearthing one or two positives, it’s hard not to come away with a sour taste in the mouth. Since the studio’s done a similar thing before, there are few compelling reasons to fire up this copy and paste job.

Shining King Megaways: Overview For their fifth whirl on the Megaways game engine, developer iSoftBet has decided to clone one of their earlier slots Majestic…

Reel King Megaways: Overview Nearly all iconic slots are bound to receive the Megaways treatment it seems. The darling of the UK slot scene, Reel…

Ducks Till Dawn: Slot Overview Fans of the 1996 Tarantino film From Dusk Till Dawn might be a little disappointed to know blood-sucking vampires are…