Developer Pragmatic Play gives players a taste of history in Spartan King, a slot based on Leonidas and his legendary band of 300. The game doesn’t specifically state this, but the movie/graphic novel 300 is one of the first things to spring to mind when playing these sorts of games, as is the case with NextGen’s iconic slot 300 Shields and follow-up 300 Shields Extreme. At first glance, the two games appear to share similarities. Once you hit spin though, they start to drift apart, much to Spartan King’s detriment really. 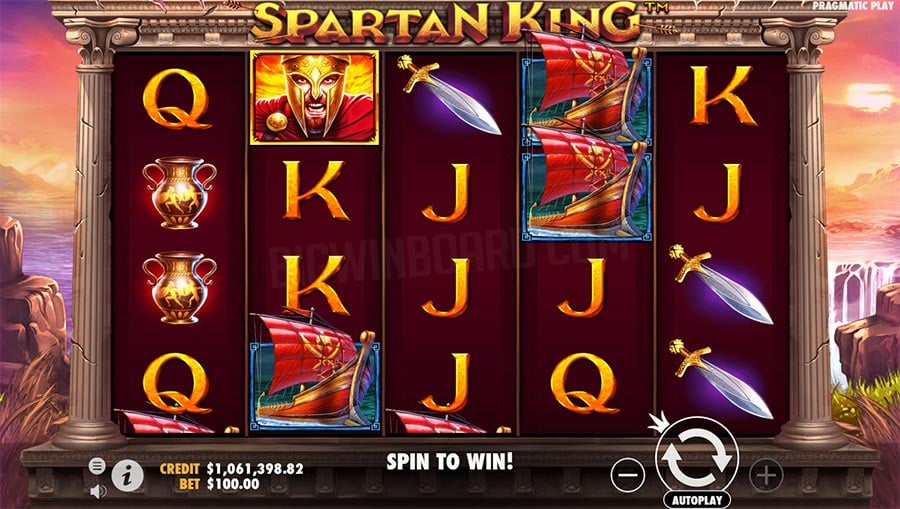 The sunny shores of the Peloponnesus greet players when the home screen loads, alongside a livid looking warrior crying out from beneath his plumed helm, the Spartan King himself presumably. From the get-go, you catch the battling hard man vibe Pragmatic Play went for. The 5×4, 40-payline grid is backgrounded by a purple, wavy Mediterranean Sea, fields, waterfalls, and mountains.

It is a pretty scene too, and you wonder why the Spartan’s were more obsessed with training for war than lounging around enjoying all the fecund glory. That’s probably a good thing since they wouldn’t have been able to do much about the 100,000 invaders at Thermopylae using the power of positive thoughts. Solid bronze and ripped muscle halted the Persian advance, not to mention passion, some of which Pragmatic Play has squeezed into the cinematic soundtrack.

Spartan King is available to play on any device, offering stakes from 20 p/c to £/€100 per spin. The game runs on a highly volatile math model Pragmatic Play has given the full 5 out of 5 rating to. Surprisingly, free spins triggered quite frequently during the test run, but payouts were mediocre at best. The default RTP is surprisingly good too, where a rating of 96.6% is agreeably high, although in this day and age it might prove to be a struggle to find it at that setting in certain markets. A decent win potential (on paper at least) caps off a set of solid figures, which aren’t quite matched by the gameplay.

There are 8 pay symbols in total, all matching the subject matter well. They start with J-A card royals, not done in the angular Greek font you often find in a game like this, but the gold trim isn’t bad all the same. They are followed by 4 premiums, consisting of swords, helms, ships, and a warrior mid sword hack. If you manage to get five of these high pays on a line, you’ll pick up wins of 4 to 7.5 times your stake. Helping knock together combinations is the 1×1 sized Spartan King wild, substituting for any pay symbol and is worth up to 20x the bet for five of a kind. This wild lands on reels 2, 3, 4, and 5.

Much like its namesake, when it comes to features Spartan King is pretty Spartan. It all revolves around a special multiplier wild. Design as a shield, it appears in a 2×2 size and may land anywhere on the reels to substitute for any of the pays and gets an extra ability during free spins.

The free spins round operates much the same as the base game, with one alteration. What you need here are 3 or more of the red flag scatter symbols to land on the reels. When they do, 3, 4, or 5 in view award 8, 10, or 12 free spins, as well as a win of 1x, 5x, or 20x the bet, respectively. In free spins, the 2×2 wild shield may land at any moment to substitute as it does in the base game. The difference now is when one or more hit on the screen, the total of any win is multiplied by the random amount of x2, x3, x5, x10, or x25.

For players who are into the Ancient Greece theme type thing, Spartan King has qualities they may enjoy. It looks alright for one, and brings a touch of the Med to the reels for a bit of escapism. The theme’s been handled quite well too. Sparta is nothing new in the slot world, or any other world either really. Yet something about the old warrior culture strikes a deep nerve, their stories having been retold in one form or another for nearly 2,500 years. That tendency doesn’t look like stopping anytime soon either so engrained are the 300 in the Southern European psyche.

Once you start hitting spin, enthusiasm starts to fade like Xerxes’ hopes after a while. Playing Spartan King is okay, but it doesn’t fire the imagination near as much as the subject matter it portrays. The star of the show is the 2×2 wild shields. Three landed simultaneously in the base game at one point, producing a tidy win, though so many at once are a rare occurrence. Shield wilds naturally perform better during free spins when they conjure up a decent multiplier. They can be irritating too since the multiplier animation plays regardless of whether there is a win on-screen or not. As to max payouts, Pragmatic Play claim wins of over 7,480x the bet are possible where a swam of those shield multipliers would come in handy, but as we’ve seen in the past, max wins in Pragmatic slots are often highly exaggerated.

On the whole, Spartan King isn’t the most exciting game to ever come from this studio. The main issues are the game phases are hard to tell apart, and restricting a game to 40-paylines on a 5×4 grid just feels dull, unless you come up with something extra to carry the game. Spartan King simply doesn’t have that. Then there is also the niggling thought that the Spartans have been better represented in slots before.

Space Invaders: Slot Overview With so many developers having a crack at the retro thing these days, it’s almost turning into a genre of its…

Invaders Megaways: Slot Overview ‘There is a feature with every spin in this game – and look for the Uni-Cow‘; that’s how SG Digital sells…

300 Shields: Overview It’s time to stand up for what you believe in! Defend your Spartan homeland from the huge invasion by Persia. Collect your…