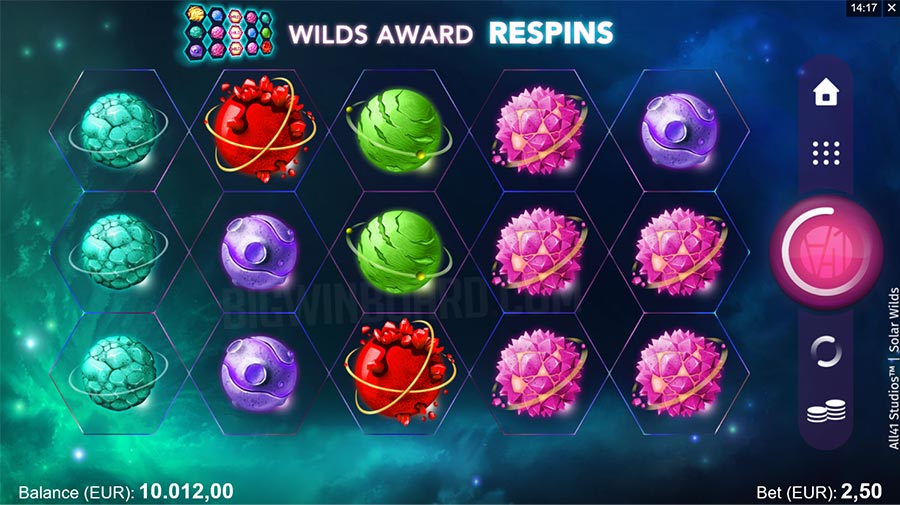 Update February 27, 2020: As predicted, Space Enigma, scheduled for release on February 27, 2020, appears to have been cancelled.
Update December 12, 2020: The game has been redesigned and rebranded as Solar Wilds, likely in order to avoid infringing on NetEnt’s Starburst brand.

The last time we came across All41Studios was with Book of Atem – a homage to earlier and more successful Book style games. This time around, they have taken the ‘imitation is the sincerest form of flattery’ saying and pushed it to the extreme. So much so, that they have moved from imitation into more blatant cloning. What happened at All41Studios? Their creative department up and left the building after the first few slots failed to make an impact? Partners Microgaming is on their case to hurry up and release a hit? Whatever the motivation, All41Studios made the executive decision to go down the imitation route once again – this time with a mission to mirror NetEnt’s iconic Starburst slot.

Whilst Book of Atem had just enough changes to make players look the other way, it’s doubtful Solar Wilds has enough original elements to pull off the same trick. Those who have been around know Play’n GO tried a similar thing in 2019 with a slot called Starblast. After a dispute with NetEnt’s legal team, Starblast went through a re-design and was later released as Crystal Sun instead.

First impressions would suggest that Solar Wilds could very well end up meeting the same fate. The 5-reel, 3-row set up is set against a deep space background that is instantly familiar. Players choose bets from 10 p/c up to £/€100 to get the reels spinning. The aim of the game is to get combinations of three or more symbols over the 10-paylines. This is helped by the fact that combos can be formed right to left as well as left to right. Regular pay symbols are all gemstones, the bars and sevens have been omitted. The lower end of the paytable has blue, purple, turquoise, green, and pink stones. The two premiums are the red worth 12x, and the yellow worth 50 times the stake for five.

Lift up the hood to inspect the engine and the details are a bit different to Starburst. For one, the RTP is slightly higher at 96.27% (Starburst 96.1%). Volatility has also moved up from a low setting to a medium one. Interestingly, hit frequency is down a touch clocking in at roughly 1 in 5, or 19.86%. So a few tweaks, but not enough so far to make up for what is essentially a very similar slot experience. Perhaps the makers have bolted on an intricate twist in the form of an epic feature that knocks Solar Wilds out of the stratosphere while blowing back the hair of a jaded gambling public? Don’t hold your breath.

If you’re hoping for some new twist to save Solar Wilds from grace, we’re sorry to disappoint. The features have stuck to revolving solely around the star symbol. This is the wild and it appears on reels 2, 3 and 4. It can substitute for any other symbol in the game to make a winning combination, but on its own, it is not worth a payout.

When the wild lands, it expands to cover a whole reel and trigger a Respin (sounds familiar?). It is also locked in place during the respin. If another wild lands during a respin it also triggers further respins. If multiple wilds land on one single spin it will only result in 1 respin. Just like with Starburst, that’s all there is to it. No bonus, no further extras.

Well, All41Studios are either brave or stupid. As we have seen, NetEnt has no problem going after copycat slots. We saw that earlier this year when they slapped Play’n GO on the wrist and made them redo Starblast as Crystal Sun. From what we have seen with Solar Wilds, there is a good chance that this is likely to be a repeated. Whilst Novomatic seems to have lost the Book case ages ago (as there are literally hundreds of clones on the market), Startburst is such an iconic slot and so strongly associated with NetEnt that they’re likely to do anything to protect the intellectual property. Yes, purists could argue that Starburst took inspiration from Novomatic’s Power Stars, but the differences outweighed the similarities. The result was a superior slot. Solar Wilds, on the other hand, feels like a studio struggling to come up with any fresh ideas.

The previous release, Book of Atem, showed that All41Studios is capable of crafting a slick slot with good graphics. Yes, the theme and gameplay was another rip off, but the execution was somewhat novel. Solar Wilds, on the other hand, begs the question – how hard is it to come up with an original concept? Even the name sounds a bit rushed. If the rest of the game possessed more imagination, you could overlook a detail like a title. But with everything else such an obvious copy it comes across as a hurried desperate throw of the dice.

For the sake of balance, there are a couple of points that make Solar Wilds somewhat interesting. Higher volatility and RTP than the original might appeal. The single spin potential isn’t bad either. What you want is a full screen of yellow gems, with or without wilds. Since the game pays both ways, this result will return 1,000 times the stake on one spin. To be fair, that is double what you get with Starburst.

To sum up, Solar Wilds might tickle the fancy of Starburst fanatics looking for the same experience with higher stats. The question is whether the game ever reaches them in its current form. It feels like the group of people who are going to get the most out of Solar Wilds are All41Studio and NetEnt’s legal representation. That rumbling you can hear in the distance is the sound of lawyers cracking their knuckles. With so much the same, Solar Wilds could easily be destined for the Recycle Bin, or at the very least receive a serious revamp before it is unleashed on the gambling public. For now, it seems that Starburst will retain its position as one of the most popular welcome bonus slots out there. So will Solar Wilds herald in a new age of no more Starburst clones? Probably not.

Book of Atem: Slot Overview The latest in the long line of ‘Book of’ slots is brought to us by All41Studios, a young independent Estonian…

Crystal Sun – Some Background Information Originally entitled Starblast, the first version of Crystal Sun was so strikingly similar to Starburst that NetEnt decided to…

Crystal Mirror: Overview At first glance, Crystal Mirror might look like another unmemorable Red Tiger slot designed to pad out an operator’s line up. However,…