Take a deep breath and head beneath the waves in developer iSoftBet’s undersea adventure Neptune’s Fortune Megaways. Those cosmically minded will be disappointed to know the game is not set on the frigid eighth planet from the sun which would have been original. Instead, we’re on more familiar ground, where the god of freshwater and the sea, Neptune, headlines. As well as ancient divine inspiration, players get cascading wins, treasure chest multipliers, free spins, and Neptune’s Bonus game. 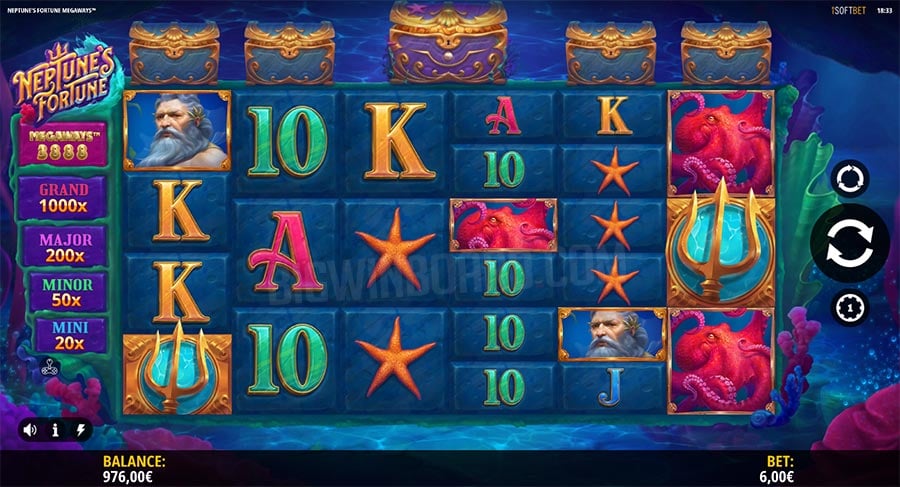 As mentioned in the intro, we are in familiar territory when Neptune’s Fortune Megaways loads. Oceans take up around 70% of the planet’s space, yet humans have only explored 5% of them. While scientists have mapped the entire ocean floor, they’ve only done so to a resolution of 5 km, so anything smaller – including Krakens, can’t be seen. Who knows what untold mysteries lie in wait, hidden in that mysterious 95% yet to be uncovered. In the slots world, on the other hand, the underwater world is a far more open book, having been used to set the background or mood of many games.

iSoftBet has done a decent job of utilising the theme, but Neptune’s Fortune isn’t an immediate stunner like some of their previous Megaways slots have been – possibly as a result of a different design team taking on the job, or due to a lower budget. Who knows. It’s pleasant enough though, where a 6-reel grid, capable of producing up to 46,656 Megaways, lies at a shallow depth where sunlight filters down to illuminate a sea bed, covered in waving weeds. A harmonious, almost Asian meditation soundtrack drifts lazily along like a week current, invoking a dreamy, relaxed state.

Snapping out of the trance requires setting a bet from 20 p/c to £/€20 per spin. Once in motion, Neptune’s Fortune Megaways serves up a win at a rate of around one every four spins, or 24.95% to be exact. The game is highly volatility though, so most of those wins will be modest, and rarely will Neptune open up his bounty. The return to player, meanwhile, comes in at 96.03%, which is pretty much industry standard.

What not so standard is iSoftBet not pushing Megaways out to its normal capacity. Reels hold 3 to 6 symbols each with the number randomised on every spin. This produces up to 46,656 ways to win, down on the usual Megaways amount of 117,649. To win on this system, three matching symbol of any height must land adjacently from the leftmost reel – triggering the cascade feature.

In regards to symbols, the paytable offers 10-A royals on the low side, while high pays are starfish, shells, turtles, an octopus, and Neptune at the head. Landing five Neptune’s is a good prospect, generating a payout of 40x the bet. After him, there is a severe drop off where the remaining premiums are worth 1.5 to 5x for five of a kind. What helps is the pearl in an oyster wild, substituting any symbol except trident scatters to form winning combinations.

Possibly the most enticing feature for some will be the fixed jackpot prizes, awarded from Neptune’s Bonus. They are joined by treasure chest multipliers, free spins, and cascades which are triggered on every win. This system removes winning symbols from the grid so new ones can cascade in and potentially create another combination. As usual, cascades only stop when no new wins appear.

Dotted along the top of the grid are 5 treasure chests, more or less aligned with the 6 reels. Whenever a wild symbol lands, there is a chance one of the treasure chests is activated. Treasure chests 1, 2, 4, or 5 can reveal multipliers of up to x5 in value. When more than one multiplier is in play, the values of each are added together. Treasure chest 3 awards the Neptune’s Bonus when opened.

In Neptune’s Bonus, players click pearls to reveal a jackpot symbol. When 3 of a kind is in view, the corresponding prize is awarded. There are four to win – Mini, Minor, Major, or Grand prizes worth 20x, 50x, 200x, or 1,000x the bet. Theoretically speaking, Neptune’s Bonus is triggered every 314 spins.

Finally, free spins are awarded when 4 or more trident scatters hit. Players get 10, 12, or 15 free spins when 4, 5, or 6 scatters are in view. During this feature, all low pay symbols are removed from the reels, so only premiums may land. Other than that, free spins are the same as regular play, meaning Treasure Chest multipliers or Neptune’s Bonus are still accessible. Free spins can be retriggered in the same way as they are triggered from the base game. You might have to be patient though since free spins hit frequency is around 1 in 340.

Neptune’s Fortune Megaways provides a nice enough dip beneath the waves to an underwater kingdom ruled by an ancient deity. Visually, the game isn’t amazing despite some nice play of the light effects going on in the background which is pretty. Equally pleasing are the soothing sound effects, yet combined together they do get a little sleep-inducing. That is an issue in a game which can take a significant amount of time to trigger the more lucrative moments – Neptune’s Bonus and free spins. On the way, treasure chests do spill forth multipliers from time to time, though if the results aren’t spectacular it’s easy to drift back to the surface after losing focus.

Things do pick during bonus games, as you’d hope. The fixed jackpots aren’t extraordinary, but no one’s complaining about a 1,000x win should it decide to drop. Free spins can be fun too, especially since the removal of low pay symbols not only increase the chances of landing higher paying combos. It also improves the likelihood of hitting consecutive cascades as all those pesky low pays are out of the way. Here is the best chance of getting within striking distance of Neptune’s potential.

All up, Neptune’s Fortune is a decent, though rather forgettable game. In its favour are the relaxing environment, and a bundle of okay features. If you require more than just gracefully slipping through the water admiring colourful coral formations, Neptune’s Fortune Megaways will be hard-pressed to deliver.

Octopus Treasure: Overview It’s been a while since Play’n GO dived beneath the waves, the last was possibly Sea Hunter, a relatively simple 3×3 affair…

12 Trojan Mysteries: Slot Overview These days, you’re more likely to come across the term ‘Trojan Horse’ in reference to a type of malware that…

Dragon’s Breath: Slot Overview After being in business for around two decades, you wouldn’t exactly call Vienna based studio Rabcat prolific when it comes to…