One of the great things about Yggdrasil’s YGS Masters program is it brings together a bunch of designers with different tastes and areas of expertise. One studio on the program that shows a strong interest in mixing all things fantasy with a mythological bent is the team at Dreamtech Gaming. Following the tradition is Labyrinth of Knossos which manages to combine both of those genres while showcasing a newly formed mechanic called MultiJump. 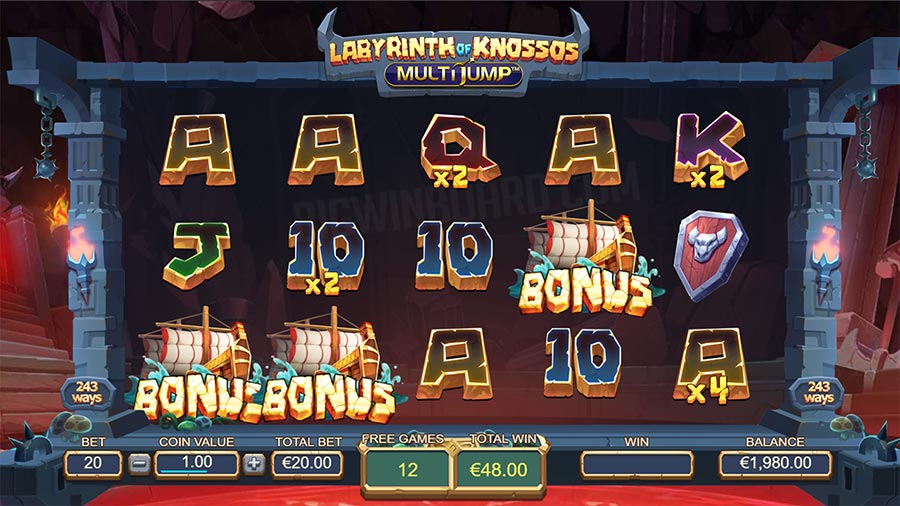 At first glance you can see Dreamtech has picked up the Ancient Greek action where Medusa Fortune & Glory left off because the two games are very familiar. That means a friendly, cartoon world to host King Minos’ famous labyrinth, full of mischievous characters. Here, players are greeted by a semi-transparent 5-reel, 243-pays ways game area located in a dungeon, bathed in cold blue tones during the base game, switching to warmer reds in the bonus. Visually, it’s not as striking as Medusa, but the link is there, and it is pleasing enough to get the job done.

Players enter the maze on any device, where stakes from 20 p/c to £/€60 per spin are possible. Despite the abundance of multipliers, they aren’t going to link into anything spectacular a lot of the time due to a highly volatile math model. Hits are fairly frequent, coming in at a rate of one every 3.81 spins, or 26.24%. Free spin frequency isn’t bad either, where players theoretically trigger them once every 158 spins or thereabout. The final piece of the puzzle, RTP, is equally respectable, generating a value of 96.42%.

Populating the game board are ten pay symbols, 9-A royals, then swords, shields, the Minotaur, and Pasiphae – Minos’ wife who fell in love with the bull. Landing a combination of five premium symbols is worth a payout of 1 to 2 times the stake. Low due to the way multipliers have been used. Dashing lad Theseus is depicted on the wild symbol which can land stacked on the middle three reels. Wilds may also carry multipliers, as well as replace any regular symbols to complete a win.

We’ve mentioned multipliers enough times to make it obvious they form the core of Labyrinth of Knossos’ features. During the base game, random pay symbols or wilds may land with an x2, x3, or, x5 multiplier attached to them. This is applied to any win they are part of. If more than one symbol in the win carries a multiplier, the values are multiplied together as they jump from relevant symbol to symbol – this is known as the MultiJump feature.

Things come to a head in the next extra, a triggered number of free spins, augmenting what MultiJump can do. Landing 3, 4, or 5 boat scatters awards 10, 15, or 20 free spins respectively. The difference in free spins is that pay symbols or wilds always land with a multiplier attached. This increases the chance of piling up decent MultiJump multipliers, which can theoretically get as high as 3,125x. Free spins can also be retriggered when 3 or more scatters land, the same way they are awarded in the base game.

It seems like the Yggdrasil partnership is working out because each release sees slight improvements in Dreamtech’s craft. Labyrinth of Knossos comes across as a lot more coherent than the first Dreamtech slot we reviewed, Ice and Fire. That one was a sprawling epic, with equally sprawling reels, and graphics which would have been cutting edge in PC gaming around the early noughties. Labyrinth of Knossos has a more up to date appearance. Then again, it also looks like the kind of slot a bunch of other studios might have designed such as Relax Gaming or Rabcat due to the sprite-based action. There are no issues over the presentation, but it’s not as personal as Dreamtech slots of the past have been. Maybe going for a recognisable look works out better business-wise, though it’s a shame if the studio gives up some of its individuality in the process.

Helping Labyrinth of Knossos stand out from the crowd is the MultiJump feature. Admittedly, this took a little time to warm to. Actually, the enjoyment curve was all over the place before settling into a consistent pattern. At first, having so many multipliers everywhere was quite exciting. The large number of almost hits, or could have been hits, was stirring. After a bunch of multi-multiplier wins returned poor to average results, enthusiasm waned. It is possible to have several multipliers in a win line yet end up pocketing chump change. Then, the feature felt more style than substance. Give it a chance, and it can get pretty exciting.

As is often the case, this occurred during free spins, which by the way triggered at a reasonable frequency. There, multipliers could stack up, leaping from symbol to symbol on a payline, multiplying its value along the way into something pretty special. Yet, it could have been more special as well. Hitting a possible 3,125x multiplier is huge, though the game has a default max win of ‘just’ 4,769x the total bet. With all those multipliers, that figure could have been significantly higher and feels kind of out of balance. Then again, premium symbol values are low making it a tougher task to score big. It’s interesting because previous releases like Medusa Fortune & Glory had huge potential, so it’s a shame more couldn’t have been shared with Labyrinth of Knossos.

To sum up, Labyrinth of Knossos is an enjoyable release, fun for the myth fans, and nice to see Dreamtech honing their design craft. MultiJump does produce some intense moments, but it could have hit harder if the default win or symbol values had been lifted.

Maze Escape Megaways: Slot Overview If there is one studio that handles Big Time Gaming’s pervasive game engine a bit differently it is Stockholm based…

Temple of Medusa: Slot Overview Of the three gorgons in Greek mythology, the one you are most likely to run into in the iGaming world…