Pragmatic Play partner Reel Kingdom is the studio behind the old school fruit extravaganza Hot to Burn Hold & Spin. The title holds a clue as to the game’s key feature – a regular hold and win bonus round. However, there is an additional Big Money Bonus Wheel which can technically lead to significant wins. You’ll need plenty of luck to unlock the game’s finest moments though, not to mention a certain mind-set to push yourself that far. This mind-set includes a love of all things traditional as Hot to Burn Hold & Spin is aimed at the ‘classic’ sector of the market. 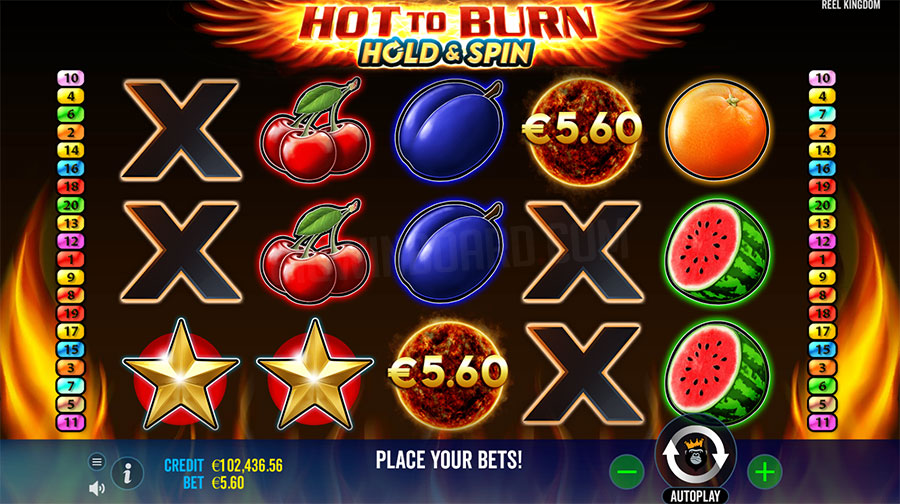 Just as some people refuse to use mobile phones unless they have buttons, there is clearly a sizeable crowd of holdouts still playing these old fashioned games. Hot to Burn Hold & Spin is a continuation of a Pragmatic Play/Reel Kingdom tradition, including Ultra Burn, Ultra Hold & Spin, and Hot to Burn. All look more or less the same, plastering massive fruit symbols over a black background and little in the way of sounds.

Hot to Burn Hold & Spin is all that, while being the biggest so far. Paylines for one, have been increased since the first Hot to Burn. Now there are 20, spread across a 5-reel, 3-row game grid. Visually, players get lashings of fruit, a few flames, and little else, aside from two stacks of payline numbers on either side of the reels. Players who like a bit of peace and quiet will appreciate the music free base game. For most of the time, all we hear are reels popping into place, though a jazzy number does appear for the Hold & Win feature.

This Hot to Burn is a lot more volatile than the non-Hold & Win version, achieving a full 5 out of 5 rating. Potential has increased to match the volatile math model, though some may question just how realistic the stated figure is given Pragmatic’s tendency to exaggerate. On the bright side, a positive aspect is the game’s default 96.7% RTP – a theoretical return value almost as bright as its symbols. Bets from 20 p/c to £/€240 per spin may be set in this fruit fiesta, playable on any device.

These flambéed slots from Pragmatic/Reel Kingdom tend to use the same batch of regular pay symbols. In ascending order of values we find ‘Xs’, cherries, oranges, plums, strawberries, watermelons, BARs, and 7s. Five of a kind wins from the X to the BAR are worth 2.5 to 25x the bet. The 7s standout because landing five of them on a payline is worth 250 times your bet. All symbol types need at least three to trigger a win, except cherries which dole out a teensy consolation prize for two of a kind.

A wild symbol and a star scatter round this section off. Wilds appear on any reel to substitute for anything except money symbols or scatters. The reels flash with flame as wilds are randomly placed on the screen. Wild combinations also award a payout, at the same value as the seven symbols. Star scatters pay on any positions. The amount equates to 1x, 20x, or 100x the bet when 3, 4, or 5 are in view.

That brings us to the Hold & Spin feature, triggered when 5 or more money symbols hit. Money symbols appear in the form of burning suns or diamonds. After any winning combinations are paid, regular symbols vanish, so only triggering symbols remain locked in position. If new money symbols land in the empty cells during the feature, they are held, and spins are set back to 4. This continues until no new money symbols land, or all positions are full.

Hot to Burn Hold & Spin has obviously been designed for a certain gambler in mind and anyone not in that circle can simply get bent or find something else suitable. As far as these types of slots go, it’s not hugely exciting. Plenty of studios manage to do the ‘classic gaming with a twist’ in fun ways, even for players not really into the genre. ELK’s Classic Series being one such example. Hot to Burn Hold & Spin, for the most part, is not one of these games. It quietly does its thing (literally), hovering up balances until the feature drops. Then, there is a chance something thrilling might occur.

During test runs, Hot to Burn Hold & Spin was all over the place. Sometimes it took more than 800 spins to trigger the feature. At others, it triggered several times within the space of 100 spins. At no point did the Big Money Wheel Bonus materialise during our first session. Firing it up the next day, the wheel was triggered within 5 spins and a 480x win was banked. The point is though, without the wheel you can pretty much kiss your balance goodbye, because it’s the only way of seeing major returns on your investment. Even filling all but one position with money symbols in the Hold & Win was generally worth around 20-30 times the stake. A tease, in other words, then it’s back to the base game grind.

In short, Hot to Burn Hold & Spin is a proudly ‘classic’ game, designed for players who dig this style. Others who accidentally fire it up will feel like they’ve been time-warped back to the dark ages.

Hot Fiesta: Slot Overview Get ready to down tequilas and bust piñatas at Pragmatic Play’s Mexican-themed street party Hot Fiesta. With a name like that,…

Hillbilly Vegas Slot Overview Hillbilly Vegas is a new casino slot from Reflex Gaming, located in Southern USA. The hillbilly Skeeter has built his own…

Piggy Luck Slot Overview Piggy Luck is a new casino slot from Gong Gaming Technologies starring three pigs with their own features. For some reason,…

Wheel of Wonders: Slot Overview If you’re longing for something a bit more exotic than Ancient Egypt in a slot, why not head a bit…