Yggdrasil Gaming’s Moai statues are back in their very own sequel and this time they’re on holiday. Sticking to the Pacific Ocean, they’ve travelled from their hometown of Easter Island to Venice Beach, California, a spot famous for flexing, posing, skating and entertaining. In other words, just letting people be themselves. This provides the perfect location for two goofy Moai statues to chill as they fire off respins, expanding reels and colossal blocks in a light-hearted game that doesn’t take life too seriously. 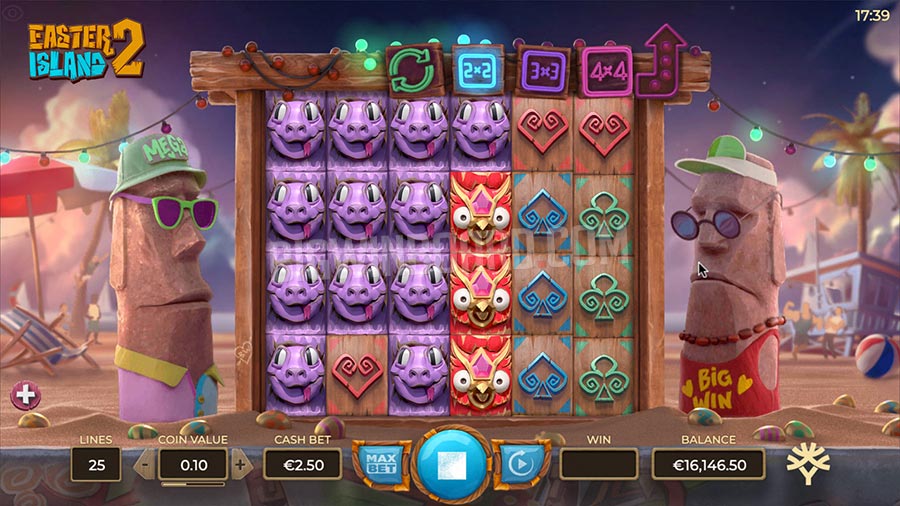 It might seem strange that two characters who live by the sea would choose a beach to spend their time off. Whatever their reasoning, the two stones have plopped themselves down on the sand beside a 6-reel, 4-row game area. If you’ve played the original, you know they aren’t passive bystanders either. Far from it. As well as being mouthy, the duo also gets involved in most of the action happening on the reels as well. Since the slot expands all over the place, adding rows, popping big symbols, and whatnot, Easter Island 2 gives Yggdrasil’s team a good excuse to show off their animation talents. The first one did as well, though it’s more refined this time around with a more populous beachy background.

The first Easter Island slot wasn’t exactly a major hit, but if you’ve played it you’ll notice one extra reel has appeared. Despite the extra space, paylines have dropped a bit to 25, and, when rows expand, there are still less than before. Volatility has been cranked, kind of, but Easter Island 2 isn’t a high-performance vehicle. If it sounds tempting though, a wide range of stakes is available from 25 p/to £/€300 per spin – on any device.

The low volatility of the original has been turned up to a medium setting, which to be honest does match the rest of the game. It’s all about kicking back and having a laugh rather than laying it on the line for immense sums of cash. As before, win length counts. Longer combos trigger better features. This dynamic contributes to a reduced hit frequency of 16.3%, while RTP clocks in at 96%. Tiresome waits can be worth it, provided the extra bits kick in.

Nine regular pay symbols are on hand to make winning combinations out of. From low to high are spades, clubs, diamonds, hearts, and five different high pay critters. The only other symbol is a wild, which only shows up on respins to replace pays to complete wins.

Features have been tweaked from the first, but fundamentally not a lot has changed. Symbol Swap Respins remain the central mechanic, which is joined by Colossal Blocks and Expanding Reels.

Symbol Swap Respins trigger on any winning combination, awarding a respin. If the combo was comprised of low pays, the winning symbol type replaces all other low pays on the reels for the respin. If it was a high pay, the same happens for the high pays. Even if another win hits, you only ever get one respin out of this feature.

If the win consisted of more than 3 symbols, Colossal Symbol Blocks are awarded as well as the Symbol Swap Respin. For a 4, 5, or 6 of a kind win, the game merges reels to award a 2×2, 3×3, or 4×4 sized colossal block, starting from the second reel. Colossal blocks can be wilds.

Finally, if the winning combination is a six of a kind win, Expanding Reels are also triggered. Here the game board blows up to 6×8 in size before playing out the two features covered above. In this mood, 55 paylines are active.

Easter Island 2 comes across as a decent follow up to what was a pretty unusual concept. Moai have appeared in slots in the past, but not as personified as this. Talking statues, from one of the most isolated countries on earth? Whatever your opinions on the rest of the game are, that is some creative thinking right there. It helps that Yggdrasil’s design team has the skill to pull it off too, adding vibrant colours, animations and sound. For some players, Easter Island 2 might be a tad too wacky though, and it might have helped if the nattering duo had an off switch.

For others perhaps, the way everything’s been squeezed through a slapstick filter could be just the ticket. A dainty theme gets a dainty math model as well as features that are more sparkle than substance. There’s no getting around the fact this is gaming aimed at players who prefer a lite approach. For those in this group, Easter Island 2’s fun-loving attitude will be more than infectious.

As well as what’s happening behind the scenes, those two Moai are a fair litmus test as to whether you are going to enjoy Easter Island 2. They’re either laugh a minute, or their infernal prattling gets under your skin like nothing else. They do bring humour and personality sure, but they can also be kind of annoying as well. If the thought of two statues chiming off on practically every action occurring during play doesn’t float your boat, Easter Island 2 probably isn’t for you. On a positive note, the pair adds a social aspect, of sorts, providing a bit of company while spinning for glory.

Shame glory couldn’t have been a bit higher than the 2,500 times the stake potential on offer. Yet it’s far from being a terrible figure and is one that suits the game. When weighing up math model, mood, and max win, everything ties together to create a balanced whole. Easter Island 2 might not be a hardcore’s dream, but it’s also not hard to envisage casual players enjoying the constant knee slappers. This is Venice Beach after all, so who cares what other people think?

Pacific Gold: Slot Overview It’s always an exciting moment when ELK Studios drops another ‘Gold’ game, and one of the first questions is, where is…

Hearts of Venice (WMS): Overview For those that can’t make it to Venice right now but want a taste of the Italian city, don’t for…