Bruce Lee may have passed away in 1973, but his memory definitely lives on in the films that he appeared in throughout his career. Fortunately, his memory also lives on via various slot games, including this WMS offering that simply uses his name as its title. It may surprise you to learn that not only was Bruce an actor, but a director, martial artist, martial arts instructor and philosopher during his life. He is still considered to be the most influential martial artist to have ever lived, and that’s not an accolade that anyone will be able to take away from him any time soon. Within this slot, you’ll get to see him in some of his trademark poses and action shots. 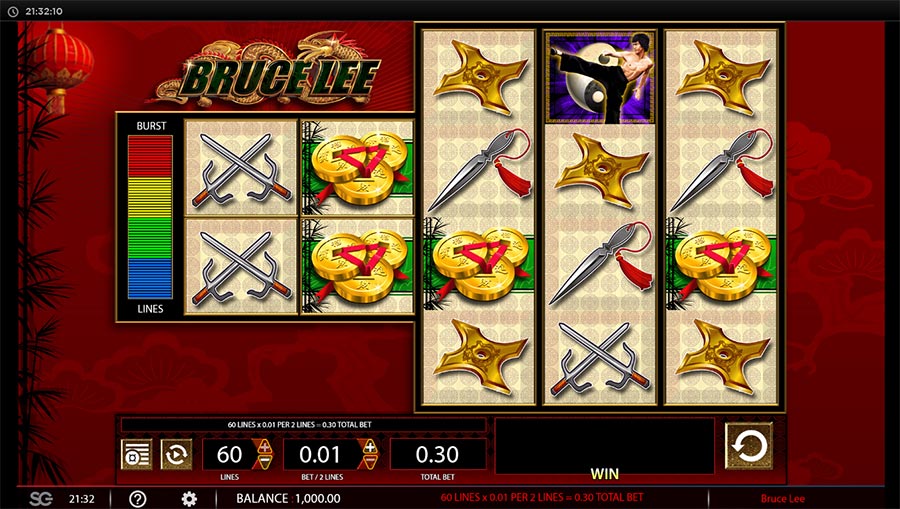 The game itself utilises a unique layout, which retains the 5 reels of standard video slots, but stunts the rows on display. So, the first two reels have a two-reel setup, while the remaining three come with four rows. Across this layout, WMS has also chosen to add a total of 60 paylines for you to bet on. Yet, these can be reduced if you wish to have fewer active, which is done by using the relevant plus and minus buttons. You’re also able to customise your bet easily, with options of between 0.01 and 2 per two lines being possible to choose from. This means that a maximum overall wager of between 30 cents and 60€ per spin is available.

The visual side of Bruce Lee will present you with some wonderful graphics courtesy of WMS. While the background of the game features a red colour with some traditional Chinese lanterns hanging, it’s the symbols upon the reels that will provide you with the most relation to the game’s theme. To begin with, there are various weapons that can be associated with Bruce Lee as symbols, such as the ninja star and the num-chuks. Then come four symbols associated with China, including the ancient scroll, golden pendants and a golden ornament. The slot’s final four standard symbols are of the dragon, Bruce Lee in kicking action, the actor’s name and finally, a close-up shot of him. This one can reward you with 53 times your stake for 5 across a full payline.

So, if the overall outward setup isn’t enough to convince you that this is a great slot game to play, how about learning more about its inbuilt features? These are certain to provide you with some thrills while you spin the reels.

It would definitely seem a little bit lacking if an online slot game today didn’t have a Wild Symbol on its reels. Fortunately, WMS has added one to Bruce Lee, which is actually the highest-paying standard symbol mentioned before (the close-up of Bruce himself). With this one appearing on the reels, you’re able to see it substitute for any of the other standard icons, helping you to create winning combinations in the process. This can be very instrumental in helping you to win larger pay-outs.

It’s the game’s Free Spins round that is its crowning glory, though. The fact that you can trigger this in three different ways is just something else that stands out about Bruce Lee, although the different ways are quite confusing within themselves. So, let’s take you through these three methods:

There’s no way that you’ll forge the name of Bruce Lee after you play this WMS slot. After all, it has some inventive and exciting features for you to activate, whilst also providing a thoroughly appealing set of retro graphics within, too. Bruce Lee is a true classic and does a great job of entertaining you from start to finish.

The fact that you can not only trigger the free spins round in three different ways, but that these three ways provide different variations of the free spins feature make Bruce Lee even more appealing. Plus, with the wild symbol showing up during both base gameplay and free spins, you’re able to really benefit from this. Bruce Lee is, without a doubt, one of the best releases to come from this brand.

Book of Dead Slot: Overview Far be it for us to state that there are many (some may say too many) online slots that centre…

Scroll of Dead: Slot Overview Coming across the word ‘of’ in a slot title is a pretty reliable clue as to what sort of gaming…