The ever-reliable Mayan culture gets a reboot in Ancient Eclipse, the second ever slot to leave the Bang Bang Games assembly line. Their first, Wrath of Gods, shared the studio’s interest in all things ancient and sort slipped under the radar following its debut. Ancient Eclipse looks set to make bigger waves due to a release through Yggdrasil’s partnership program, something that should help introduce the designer to a wider audience and get a bit more face time amongst players. Doing so also puts a level of pressure on the team to ramp up results, do they deliver? 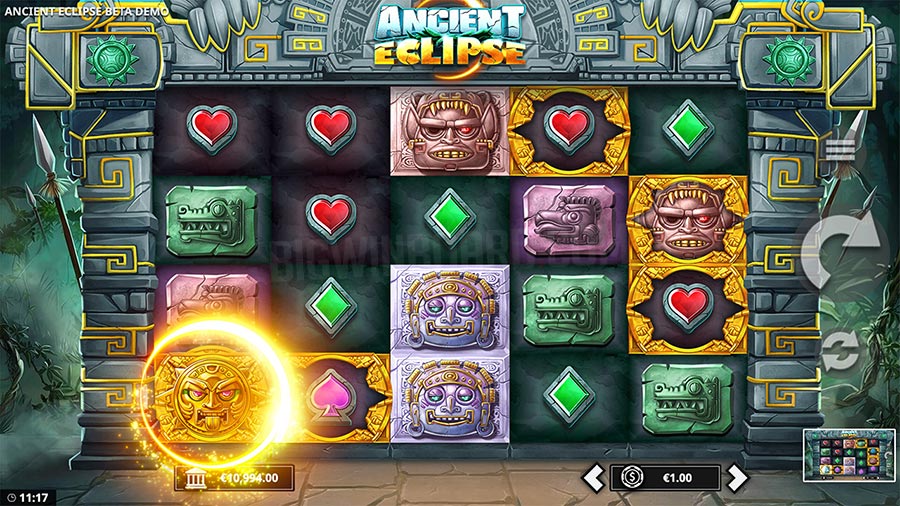 As well as attaching a heavyweight studio’s name to the game, they’ve also crafted a slot which strongly resembles Red Tiger’s modern classic Gonzo’s Quest Megaways, and NetEnt’s original to a degree. It’s not the gameplay, but rather the Central American location as well as the look of the symbols. If you’re playing Ancient Eclipse on a mobile, flip it to portrait mode if you’d like to soak in more of the vine-wrapped, temple-filled backdrop. On desktop, or landscape mode, it’s not quite so immersive. The sound effects are nice, as is the tribal beat banging away in the background. Audio and visually then, Ancient Eclipse delivers though there is a nagging feeling of having seen it all before.

Played on a 5-reel, 50-payline grid, the Mayan adventure is available on any device, offering bets from 20 p/c to £/€100 per spin. Bang Bang Games have provided just about every fact or figure you could possibly want, so the transparency is appreciated. An RTP value of 96.53% and a hit frequency of 1 in 3.4 spins points to some decent stats being used. For those who like a challenge, yet not brutally so, medium volatility is on hand to sort you out. One thing that may be a little daunting perhaps is the relatively high free spins hit rate which we reckon to be within Bonanza territory, so don’t expect bonus games to pour down like tropical rain.

The paytable begins with clubs, diamonds, hearts, spades; then there are three rock sculptures and two premium masks. Land a line of five masks, to receive a payout of 4-5 times the stake. This equates to full screen wins of 250x the bet, which isn’t a whole lot, but doable at least with the way features work, not to mention augmented at times by multipliers.

The goal of both base and bonus game is to collect Sun Frames to load wilds onto the reels. How it works is whenever a moon symbol lands, its position is marked by a golden Sun Frame. If a moon symbol goes on to land in a Sun Framed positions, the Eclipse feature is triggered. All framed positions are then turned wild for a win evaluation. If there is more than one trigger, the win is multiplied by the number of triggers. Frames are cleared in the base game once used.

The feathered warrior symbol is the scatter, appearing on reels 2, 3, and 4. Landing 3 in view trigger the bonus game which starts with 10 free spins Any frame on board in the base game at the point of triggering the free spins will be carried over into the bonus and lock with new ones. Now, at the start of each free spin, any wild on the reels from the previous spin locks a Sun Frame on its position. In free spins, Sun Frames remain in place for the duration of the feature. If a moon symbol lands and does not trigger the Eclipse Feature, one extra free spin is awarded.

Bang Bang Games has delivered a slot which possesses its share of good and bad points, yet after a while, the negatives start to blot out the positives. Firstly, it is a nice looking game, with great audio, and a tangible atmosphere. Those parts Bang Bang Games has nailed. The features look intriguing on paper, but in action, the game starts to lag quite quickly.

It feels like the Eclipse feature hogs much of the RTP, so it’s a case of hoping as many frames land while waiting for free spins to come. Wait you will too since it can take an age for them to trigger – 390 spins isn’t outrageous but is a considerable length of time, especially if you’re experiencing a longer than average cold run. It wouldn’t be so bad, except the base game is a bit of a drag. Sun Frames deliver less than you hope for, where wins averaged around 30x the bet during test runs. In the meantime, the balance consistently headed south due to the awkward payline setup and meagre wins.

When free spins finally triggered it felt like we’d just climbed the world’s tallest step pyramid. With thighs and glutes burning, it was time to settle in for the reward. Alas, free spins played out more or less the same as the base game. When they were done it was a struggle to stay focused and continue the grind. In Ancient Eclipse’s defence, decent potential is available though, where the max win is 4,595 times the bet. The game also produces a comprehensive set of respectable numbers from potential to hit rate to RTP. Yet they haven’t translated well to the game. Something’s been lost between the drawing board and actually hitting the spin button which makes playing Ancient Eclipse less enjoyable than it might have been.

If you hold Ancient Eclipse up to the gold standards in this category, the Gonzo’s etc, the differences are stark. The repetitive gameplay, the more often than not ineffectual Eclipse feature, and the free spins, just aren’t super fun a lot of the time. That’s not to say players won’t find success here, though it’s hard to think of many reasons to play this one over others in the South American jungle category.

Gonzo’s Gold: Slot Overview If there is one conquistador who needs little introduction is the morion hatted explorer Gonzo. This cheerful chap burst on the…

Gonzo’s Quest Megaways: Overview When NetEnt bought out Red Tiger in a deal worth hundreds of millions; it didn’t take long for the iGaming world…

Apes of Wrath: Slot Overview Players into American realist literature will be a tad disappointed they won’t be joining the Joad family and the rest…

John Hunter and the Mayan Gods: Slot Overview Hold on to your antiquities people, Pragmatic Play’s ‘man with the hat’ is back, this time taking…